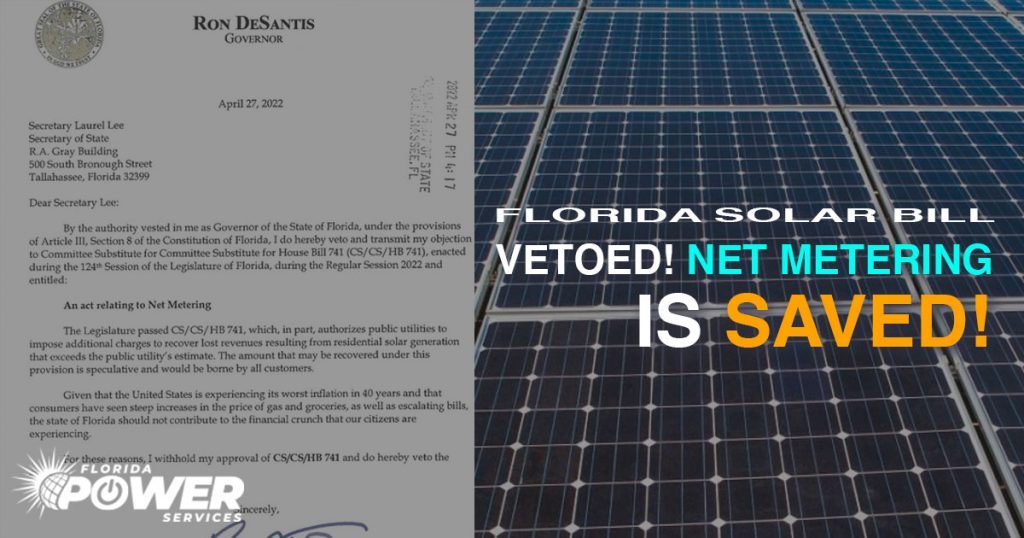 The devastating and corrupt solar bill that was set to destroy net metering in Florida has been vetoed by Governor Ron DeSantis!

In a major win for solar freedom and the future of clean energy in the state, Gov. DeSantis stood firm against the utility-backed bill.

The (HB 741) bill would have ended net metering in Florida, allowing utilities to charge solar customers, despite their solar energy sharing.

Net metering is a system where electrical companies pay solar owners for the excess energy that they share with the grid. This energy is redistributed to non-solar customers.

Utility companies used this solar bill as an attack on the rising Florida solar industry. Documents revealed that Florida Power & Light asked Sen. Jennifer Bradley to sponsor the legislation and followed it up with a $10,000 contribution to Sen. Bradley’s political committee.

The solar bill will now be sent back to the house, where it will be available for consideration until the end of the current session. Two-thirds of the voting members in each house must vote to override a veto in Florida. With the initial House vote of 83-31 and the Senate vote of 24-15, it’s not all smiles just yet. But it looks good.

This news comes as a huge surprise but a very welcome one! DeSantis has saved the day here, coming through for the solar industry in a big way! Solar in Florida is crucial to the economy and our green future.

Homeowners need incentives to make the investment, and net metering is exactly that!

84% of the Florida population are in support of net metering. And thankfully they’ve been listened to!

We made posts in an effort to fight this solar bill earlier in the year. But a big thanks must go to everyone who protested peacefully in Tallahassee.

We can’t wait to see if Florida brings back the state solar incentives!

“Florida Should Not Contribute to the Financial Crunch”

“Given that the United States is experiencing its worst inflation in 40 years and that consumers have seen steep increases in the price of gas and groceries, as well as escalating bills, the state of Florida should not contribute to the financial crunch that our citizens are experiencing,”

And he’s not wrong. A recent study showed that the solar industry adds 40,000 jobs, $18.3 billion to the economy and $3.2 billion in household income! That’s on top of the $10.6 billion added to Florida’s gross domestic product.

“As Governor, I’ll always hold big utilities accountable and reject their unjustified rate increases. We’ve got a plan to see one million solar roofs installed across the Sunshine State during my first term, and I can’t wait to get started.”

“THANK YOU @GovRonDeSantis for the VETO of HB 741—the Net Metering Bill that would’ve DESTROYED Florida’s solar industry. I’m PROUD to be 1 of only 3 Republicans in the entire FL Legislature to VOTE NO on this bad Bill. I will NEVER support corrupt special interest legislation!”

Florida Avoids the Mistakes of Other States

The SEIA has said that other attempts tried to adopt similar net metering bills and it ended badly. Residents ended up paying expensive bills and solar installations dropped off completely.

In Nevada, they removed their net metering program and saw a huge loss in jobs and local businesses. Within two weeks, a major Nevada rooftop solar company went out of business, ending 550 jobs! In the next year, Nevada’s legislature reinstated net metering, as the Nevada people demanded it returned.

Will Giese, southeast regional director for the SEIA, said in a statement on its website:

“This solar bill is a nightmare for anyone who believes in energy freedom and the rights of people to choose the energy that works for them and their families. Net metering has helped over 100,000 Florida homeowners make that choice, and utilities are now banking on the state government to strip those rights away and pad their monopoly hold on electricity.

Strengthening our energy independence at the national, local, and individual level is more important now than ever before. In the last few years, Florida has seen its solar industry grow to employ 11,000 people and generate over $10 billion of economic activity. States that enact bad legislation like this will see much of that business growth disappear, and we’re urging Governor DeSantis to veto the bill and maintain Florida’s place as a national energy leader. This is a simple choice between helping monopolies or helping the people.”

Why Is Net Metering So Great?

If you are considering a residential solar installation in Florida, then good news – net metering looks set to stay! That means you can actually make money for the excess energy you make, reducing your utility bill and improving your return on investment.

In Florida, it’s particularly useful. As we get so much sun, there’s a lot of excess solar generation. We get 237 sunny days in Florida, compared to just 205 on average across the U.S.!

This makes it more affordable for all. AND it’s great for the environment. It reduces the need for fossil fuels and non-renewables as Florida residents turn their grid-tied homes into clean energy producers!

What’s not to like? Unless, you’re a greedy utility company who has no interest in saving the planet.. 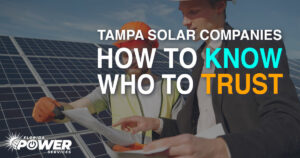 Tampa Solar Companies: How to Know Who to Trust

With such a large variety of Tampa Solar companies, it can be hard to know which solar installer to trust. The last thing you want is to be scammed. 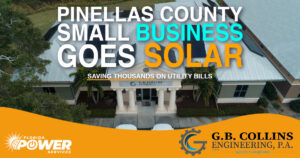 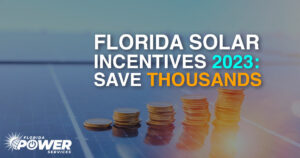 Florida Solar Incentives 2023: How to Save Thousands

Florida solar incentives in 2023 can help you save thousands of dollars on your installation and ongoing electricity costs.