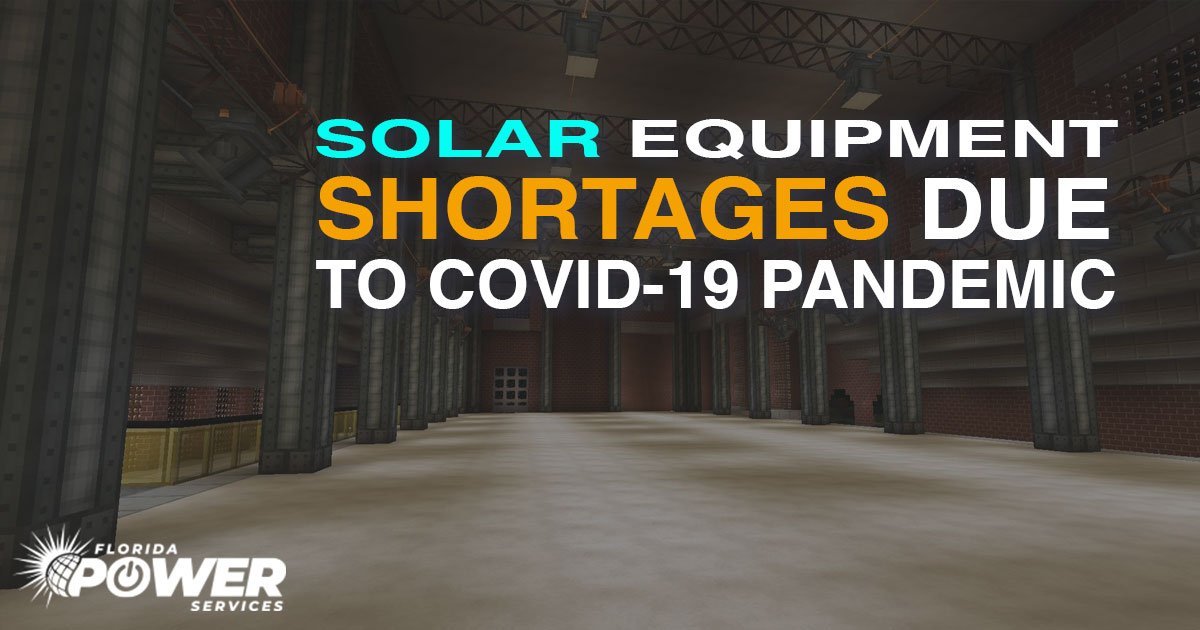 Vaccines may be providing hope that the COVID-19 pandemic is reaching its demise, but solar equipment shortages are still present as COVID continues to shutdown countries around the world.

Act now and you’ll avoid paying overpriced costs. Here’s why solar shortages are happening and why you need to hurry up and invest in solar in Florida now:

Ongoing Disruption to the Solar Industry

COVID-19 has disrupted the production and transportation of key solar equipment that is typically imported from overseas since as early as last March. Although the equipment has been making its way through, the solar industry is seriously suffering from shortages that show no sign of slowing soon.

In particular, China is one of the major sources of solar equipment and has placed many of its cities under frequent lockdowns. This has caused factories and suppliers to shut down entirely, causing solar equipment production to hit a wall. Naturally, as China accounts for 80% of the global market, this has triggered shortages for solar installers, big and small. The same can be said for much of Europe.

The Fight for Raw Materials

Even US manufacturers are hit by China’s delays, as raw materials such as aluminum and PV glass have been hard to find. With production rates so low, imports to the US have been far lower than expected. Shipping companies have also suffered delays, with ports being closed or restricted worldwide.

It Could Be Bad News for Solar Batteries Too

The majority of the world’s lithium-ion battery manufacturers are also struggling to keep up with the demands. With mandatory lockdowns and less staff in factories triggering delays across the board.

These delays are occurring as we see boosts in growth for both solar battery storage and electric vehicles.

COVID Has Heavily Hit the US Solar Industry

According to the Solar Energy Industries Association, the US solar sector has already lost over 65,000 jobs thanks to the pandemic. That’s five years of job gains!

Most of the job losses have been in the residential and commercial solar sectors. These employ a larger number of people per gigawatt than the larger utility-scale solar market. We’ve seen other companies have their solar projects canceled and even some installers close entirely.

Solar Prices Expected to Drive Up!

The cost of PV modules has risen for many solar power installation companies over the past year and is likely to rise again as these solar equipment shortages hit.

When supplies, competition becomes fierce and that causes the prices to rocket. And guess what? As solar companies have to pay higher equipment costs, they too have to raise their prices.

The Warning Signs Are Clear

The warning signs are evident in countries such as India and Australia. They’re already feeling the heat of China’s worrying glass shortage and are seeing prices rocket higher than Gamestop stock.

Glass shortages have seen prices rise by 71% since July and it’s hitting every country. Naturally, if the price for Chinese glass goes up, then so does the competition for US glass.

The general manager of the world’s largest solar company said, “If solar power generators see solar projects as uneconomical, they will delay investing in new projects and that will drag down solar demand. Solar power plant profits will drop below acceptable levels… if glass makers go on to push up the costs.”

Glass now accounts for around 20% of all solar panel production costs, double the usual amount. Although new glass factories are being planned, it will take at least 1-2 years before they have any effect.

The solar industry could be 20% to 30% short of the glass it needs next year, with the market not being back in balance until 2022. One analyst says: “The shortage is expected to worsen over the next year. Prices for such glass may remain at high levels.”

Why You Need to Invest in Solar Now

Thankfully, Florida Power Services “The Solar Power Company” has enough supplies to cover us for a little while. But as this pandemic’s latest variants spread violently, we fear the worst – an imminent solar equipment shortage.

We don’t want our customers to lose out, paying far higher than they should. That’s why if you’re considering solar installation in Florida, you should hurry up and buy now! Supplies usually have to be ordered in advance, meaning these higher rates could last throughout 2021.

Avoid paying against the competition; install solar in Florida now!

Hope on The Horizon?

The good news is these solar equipment shortages last forever. Hopefully, within the next year or so, we can all start to put the Coronavirus behind us so that prices can return to normal and we can see the projected decrease in solar equipment costs.

However, if you want to make the most of this year’s tax credits and other incentives, then you need to act fast! It’s highly advised that you get in ahead of the competition and buy Florida solar now!

Thanks to the extension of the federal tax credits included in the recent $3 trillion COVID-19 stimulus package, the demand for solar should keep the industry flowing and moving onwards to the bright future it’s projected to have.

HURRY UP AND INVEST IN FLORIDA SOLAR NOW!

As the leading solar installation company in Florida, we currently have enough solar equipment supplies to get your project started and complete at no extra cost or delay. However, we’re warning all potential customers to get in fast!

Schedule a consultation with Florida Power Services “The Solar Power Company” today, and we’ll answer any questions you may have and can install a solar system that ensures your property is built for the future!

When hurricane season hits hard, millions of Florida residents are left in the dark with power outages. However, many people prepare and enjoy electricity by installing solar power storage systems. Here is a guide to why having your own solar battery bank is so important during Florida’s hurricane season:

The Benefits of Solar Battery Banks During Hurricanes

Picture this: A major hurricane arrives, it rips apart Florida’s electrical grid and leaves millions in the dark. It lasts days, maybe even weeks. Food perishes fast. People are stumbling around with torches, struggling to stay calm and their phones are dead.

But you’re prepared. You have a solar battery bank. The grid goes down and it kicks into action, supplying you with all the energy you need for fridges, lights and communication. Even at night, it provides you with electricity. When it starts to run low, even a cloudy day is enough to keep you safe. Finally, your energy bill reads just $11, the monthly utility charge.

Does Solar Power Work During Hurricanes?

If you have a solar power system with a battery bank or stand-alone inverter, then yes! Without that, your solar system will go down along with the grid to avoid back feeding power and causing electric shocks. That’s why solar battery banks are essential to keep your power on during Florida’s hurricane season!

Solar battery banks take excess solar energy and store it on-site, ready to be used whenever you want. Whenever there is light hitting the panels, energy is stored. If it’s a clear day, you can even feed excess electricity back into the grid and earn money!

Despite hurricanes bringing heavy cloud cover, solar panels can still absorb 25% of their capacity. The exact amount depends on how dark cloud cover is and the number of breaks in the clouds throughout the day. In general, it’s enough to keep your essential appliances running day and night.

Thankfully, the best solar power systems can withstand Florida’s hurricane season. High winds and heavy rain could potentially dislodge a solar panel, but by using high-quality materials and craftsmanship, we ensure they’re strong enough. Florida’s hurricane season is particularly brutal, so installation companies work hard to ensure their fixtures are strong enough and meet state regulations. The majority of solar panels should hold off winds of up to 170MPH.

Solar panels are also built from a mix of aluminum and glass, making them extremely waterproof. Even the heaviest of rainstorms won’t cause damage. Rain can actually be a positive, as it clears away dirt build-up and pollen, making them more efficient.

Unless you’re caught in one of the biggest hurricanes in history, or have a tree dangling above your panels, then you have no reason to worry about solar panel damage. Storms are one of the primary reasons that manufacturers make solar systems for.

The best solar panels are known for being impressively resistant to hail storms. The National Renewable Energy Laboratory reported that only 0.1% of systems suffer damage every year. Manufacturers build their solar panels to last and that includes fighting off large hailstones that fall at 50MPH. Although you’ll see car windows shattering, your solar panels will stand firm.

Hurricane debris tends to prove no match for solar panels. Tree branches, roof tiles and other common debris will bounce off. Of course, there are limits to what any material will take, but our solar panels are built to fight off all the dangers of hurricanes.

Why Do Some Solar Panels Break During Hurricanes?

Poor installation. It’s as simple as that. Cheap materials, bad tilt, undersized racks, inadequate bolts and clamp failures are just a few examples. Some solar companies cut corners and it’s the customers who suffer. Use a reputable Florida solar power installation company and you won’t regret it. Our panels have survived all of Florida’s hurricanes for over 25 years.

In the unlikely event of your solar panels suffering damage, there is no reason to panic. Most homeowners’ insurance plans include solar panels as a permanent part of your home. That means they should be covered! We advise contacting your insurer before installation to see whether you’re covered and if not, to see if you can be.

As we’ve already mentioned, the grid can be down for days or even weeks after a hurricane. Business owners with a solar battery bank can stay open, keep food fresh and process credit card payments when every other store is shut. Commercial solar power is rapidly on the rise and proves the difference between a closed store and an open store during hurricane season.

If you’re a business owner considering investing in commercial solar power, then contact us today to get started.

If you want to keep your lights on during Florida’s hurricane season, then you need a solar battery bank. Contact Florida Power Services “The Solar Power Company” today to get started. We’ll provide you with expert advice on off-grid energy and how to make your home self sufficient. Prepare now before it’s too late!

Our Solar Warranties Are 15 Years Longer Than Tesla’s! 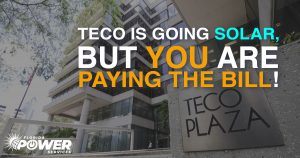 TECO Is Going Solar, But You’re Paying the Bill!

Tampa Bay Electric Co.’s customers are set to see painful rate hikes over the next year, as the company covers its costs for investing in solar. 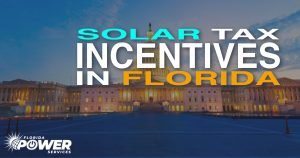 If you’re looking to go solar in 2021, then solar tax incentives in Florida can help with the installation costs in the form of a tax rebate.