Keeping an eye on your investment has never been easier thanks to SMA’s Sunny Boy solar inverter line. SMA is without a doubt the global leader in Photovoltaic technology, since 1981 SMA has been producing top quality solar inverters that are still the gold standard in both home and utility solar power plants today.

Daily Reports On The System Production, Alerts In The Rare Event Of An Issue, Weather Updates And Real Time Power Output. 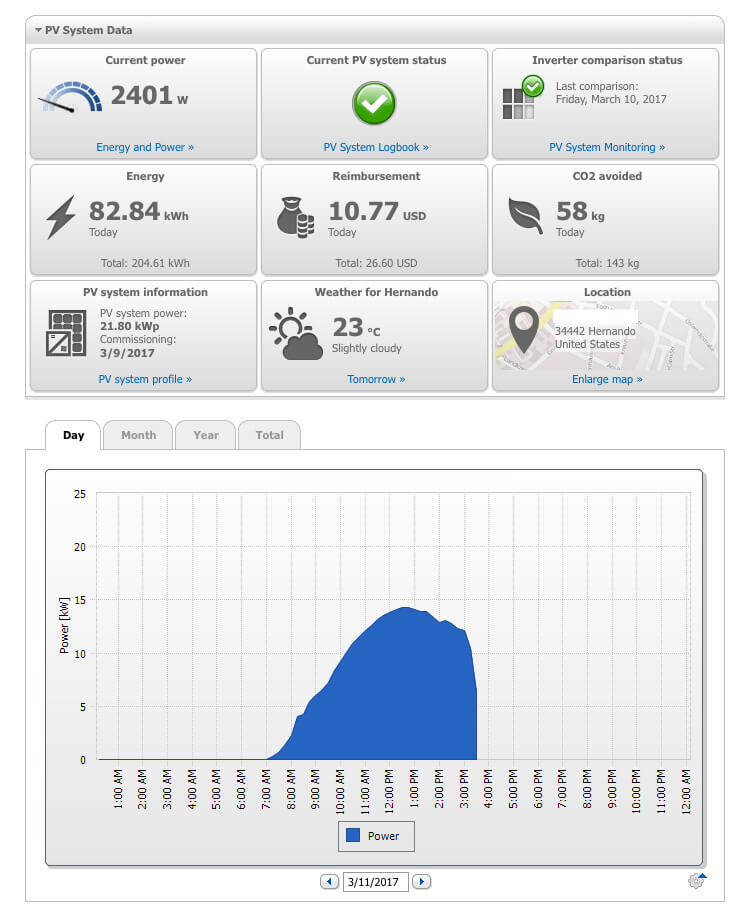 After your solar system is commissioned you will receive an email from SMA asking you to set up your account. After this is done download The Sunny Portal App;

setup your account, and login anytime to check on your own personal solar power plant. 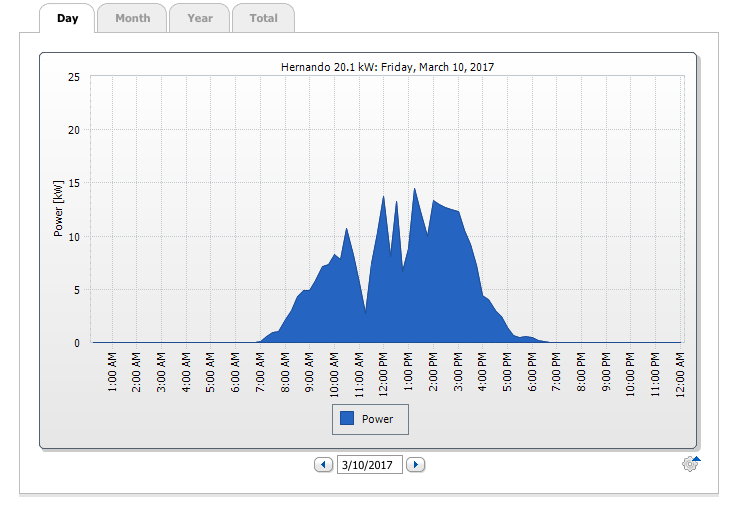 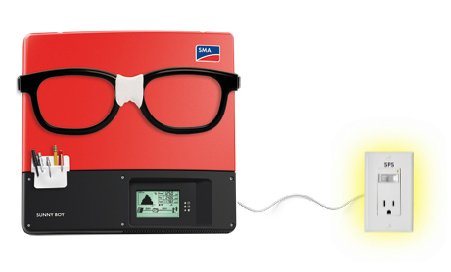 In a tropical climate like FL there will always be moisture in the air, showers, passing clouds and maybe even some morning/evening shading from trees or
structures. These occurrences will cause dips in PV production affecting AC output, this is where the inverters Maximum Power Point Tracking (MPPT)
comes into play.

Another great feature that we really like on these units would be the Secure Power Supply (SPS) this feature allows power to be drawn from the inverter during a power outage. Charge your phone, keep the fridge cold, run some fans. 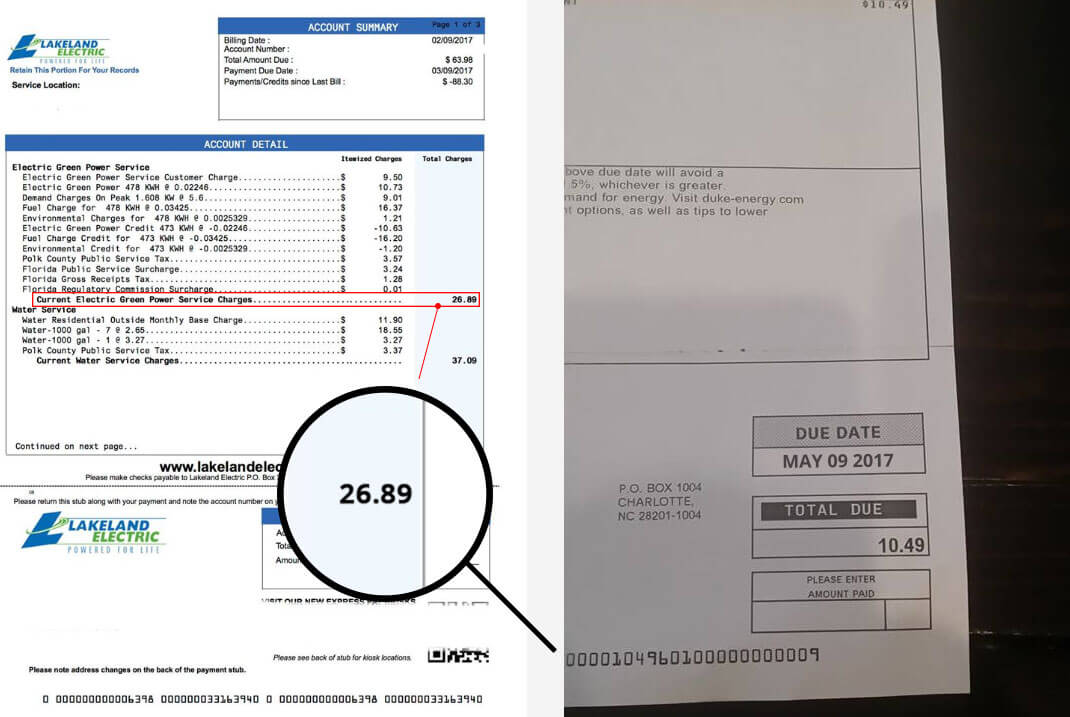 Protect Your Investment With Inverter Monitoring

We started working with SMA in 2006 using the SB5000,
now almost 11 years later and hundreds of units performing in the field gives us the utmost confidence
when we recommend SMA inverters in our designs.

If you’d like to see your electric bill down to $10-$20 a month visit our costs and savings page for more information.


Monitor performance of your solar system:

I could tell you about the incredible service, workmanship, and price. I could tell you about the expertise and knowledge that Joe demonstrates the first time you meet him. However, what you really need to know, is before you sign with some other company, you owe it to yourself to talk to Joe.
Malcolm Page
15:07 11 Jan 19
Joe installed our Enphase solar system in 2015; the system works perfect and my energy bill was reduced 65%! Joe's installation was top notch, and the very few times I called for support (usually after a storm knocked out the router) Joe helped me get everything back to normal in no time. I highly recommend FPS - great system, expert installation, flawless performance!
John Hurst
23:45 03 Oct 18
Install went well with no problems and no delays. Joe and his crew showed up when they said they would. Total price of materials/labor was good and much cheaper than the Vivint and Solar City groups. Installed about 9mos ago, and still working well with no issues.
chris ross
01:03 25 Sep 18
Great experience with Florida Power Services. We had gotten our first quote from another contractor and we just about scrapped the whole idea of getting solar. Then we had Joe come out and told him we wanted a ground mount system that could double as a carport and he gave us a great price and a plan with the estimate. It didn't hurt that you get 30% tax rebate on a system this year. Joe and crew came out on a Tuesday and put in the necessary hours needed and got it done that Friday. The only wait time is TECO swapping out the meter. We are happy with the install and it's addicting watching the meter and the power the system is producing on the the app. Thanks Joe!read more
Sonny Greene
15:50 19 Sep 18
Our Solar Edge system was damaged during an electrical storm and our original installer Guardian Solar were not responsive. I put calls out to various vendors recommended by Solar Edge and Joe was the first to promptly respond and get to our site to investigate. Joe was incredible knowledgeable, thorough and diligent in diagnosing the fault and then spend hours on the phone with Solar Edge arranging a replacement inverter under warranty. We are back in business generating power thanks to Joe. I would highly recommend Joe to any person looking for assistance with designing, installing and maintaining a solar system.read more
Hans Smit
17:10 17 Sep 18
Did great job. Came when he said. Good price.I recommend him. If I had know about him when I was putting in the system I would have used him. I'll be telling everyone about him.
Dan Heston
15:46 11 Sep 18
Florida Power Services recently finished installing our 11.6 K solar system and we cranked it up last week. I have worked with contractors in a field other than solar power and gone through detailed bid procedures. We didn’t do that in this case but we were looking for the same thing we always do in more rigorous bidding processes and that is, finding the least-cost-competent contractor. The simple translation for that term is, “Best Bang for the Buck.”We found that with this company. The owner, Joe Forest, is very direct and honest in his dealings and will let you know what he thinks is the best solution to your energy-producing requirements. I received a detailed quote and checked that, along with what Joe told me about the system components and projected performance. Everything I was told checked out and we got the process started. From there, we immediately received engineering drawings and paperwork for permits and within a week, work began. The installation crew, including the owner have obviously done a few of these and there was an efficient, coordinated effort resulting in a clean, finished product in two days. The panels look sharp and all conduit, inverter boxes and other hardware reflect a top professional installation. Upon completion, the crew took aerial shots of the house and solar hardware via drone and sent us a picture from above showing the finished product.We could not be happier with the entire process and result and give Florida Power Services our highest recommendation.read more
Robert K
20:26 20 Jun 18
‹
›